The Gaiscioch Social Gaming Community was inspired by founder Benjamin "Foghladha" Foley's favorite childhood Irish legend found within the "Lebor Gabála Érenn" and "Cath Maige Tuired". The Tuatha de Danaan and their Gaiscioch were one of the most inspirational stories for Benjamin, who finally took the philosophy and applied it to a social gaming community. In 2001, Benjamin found the means to bring this story to life in the MMO classic "Dark Age of Camelot". 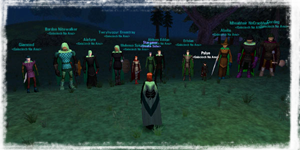 The "Gaiscioch na Anu" were formed in Dark Age of Camelot on November 11th, 2001, on the Nimue server to bring classic Celtic fairytales to life in a virtual version of Ireland. Originally designed as a Roleplay guild, the Gaiscioch excelled at mixing roleplaying with large scale all inclusive siege warfare. The Gaiscioch na Anu became leaders of the Hibernian realm in all things Realm vs Realm as well as host to monthly Dragon raids. The first round of community events came in the form of Gaiscioch Siege Nights. These events were large scale coordinated assaults on the enemy realm which were always focused on using speed and tactics to out maneuver our much larger foes. By the time the Gaiscioch left Dark Age of Camelot they were over 500 members strong and built an extended alliance which included 32 guilds. In 2006, like many Americans, the leadership of the Gaiscioch were hit by financial hardship and ended up closing down the community until the economy recovered or a more suitable game was found. Many moved on to play Guild Wars while they searched for employment, while others scattered to the wind trying every game under the sun.

On September 16th, 2008, a few of the original members decided to give it another go and give Warhammer Online a try. With 8 members of the original team, the focus was changed from roleplaying to one of casual nature. The leadership learned how the economy, and life situations could hinder one's ability to participate in a moments notice and they wanted to create an environment within Warhammer Online where people of all skill levels, ages, or professions could come and have a good time, make some new friends, and contribute In their own time and their own way.

Through the 2 years of running the Warhammer Online "Family", the Gaiscioch hosted 3 community driven public events per week including the smash hits "Battle for Badlands" and "Open PuG Night". They focused on building communities and organized the 58 guild Tuatha Extended Alliance which organized community events for the entire server. The Gaiscioch gained recognition for these events from Mythic Entertainement, Massively.com, GameTrailers.com, Warhammer Alliance, and TenTonHammer. 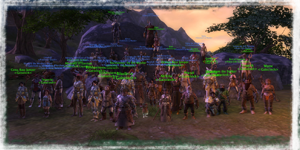 At the hard collapse of Warhammer Online, the Gaiscioch knew they had to find somewhere to move, and fast. The collapse that happened in Dark Age of Camelot lead to the majority of the community to scatter to the wind and never be heard from again. In an effort to keep the community together the Eldership evaluated dozens of games, none of which supported the community development rich environment which we found in RIFT.

RIFT developer, Trion Worlds, invited us to visit their headquarters in Redwood Shores, Ca. To take an inside look at RIFT and share some comments for the RIFT publicity video "Enter the RIFT" which featured Gaiscioch Leaders Benjamin & Juliana Foley. RIFT had a very strong development team, a close connection to their community, and the technological know how to produce an awesome game.

The Gaiscioch assisted in testing upcoming patches, worked directly with Trion staff members to identify issues, suggest features, and provide field reports to developers. In addition they led large scale public community events such as the Telara Saga, Telara's Last Stand, The Great Conquest, Capital City Sieges, PvP Rift Trainings for both factions, and hosted several events every week for the benefit of the community.

Trion's commitment to their title and the lively player base have led to a very successful expansion into this next-gen MMORPG title. 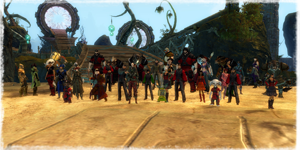 On August 28th, 2012 the Gaiscioch launched their 4th chapter in Guild Wars 2. This launch held special significance as through their relationship with ArenaNet, which they nurtured for over 2 years before launch, the Gaiscioch were given a server named after Roger "Oldroar" Rall titled Sanctum of Rall. The campaign to get a server named after the fallen member of Gaiscioch involved hundreds of people who baked cookies, pies, cakes, and other sugary treats and mailed or hand delivered them to ArenaNet as well as a letter writing campaign that not only involved the Gaiscioch, but much of the Warhammer Online, and RIFT communities. Roger loved Guild Wars 2's concept to the point he spent the final 2 years of his life ranting and raving about every piece of news.

As the protectors of the Sanctum of Rall the Gaiscioch also committed to building a community site at SanctumOfRall.com for members of the SoR Community to communicate in a friendly respectful manner. Their commitment to the community also is apparent in game where they are host to more than 5 public community events every week.

The Gaiscioch grew to over 1,300 members in their first month on Sanctum of Rall requiring 3 guilds to be formed to house them all. The Gaiscioch continue to grow today anxiously awaiting the addition of an alliance system to unite the rooms of the house into 1 voice. The Gaiscioch look forward to making Guild Wars 2 their official long term home for Free-2-Play gameplay allowing members who experience a loss of work, health issues, or financial strain to continue being part of our vibrant community. 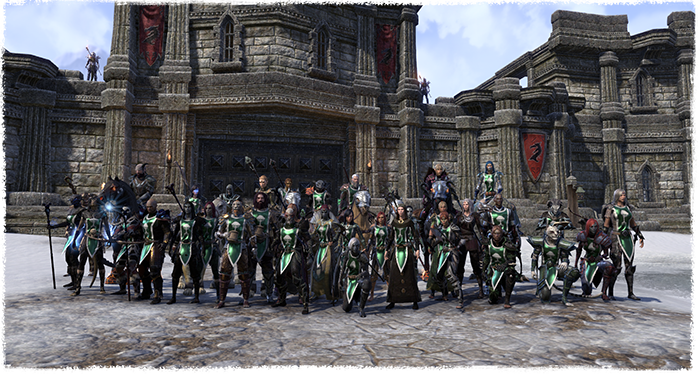 On April 4, 2014, we launched our 5th chapter in Elder Scrolls Online (ESO). At launch ESO scored the highest ever compatibility score for our community. At launch membership boomed into the 1,400 range. We held many Alliance vs Alliance events with more than 100 people in attendance. Together we shared many memorable victories and enjoyed the world of Elder Scrolls Online.

However, a few crucial flaws, such as God mode players, lack of coop in main story line, instancing issues, and the lack of guild recognition (Emblems & Nameplates) hindered our overall success. Our numbers dropped to the 220 range within the first 5 months.

Despite it's flaws, our community has stayed focused on continuing the adventure. Since the initial drop in population we have re-evaluated our focus and have taken to the small scale activities such as dungeons and trials for our focus. In addition we changed our recruitment policy in game so that we can start welcoming new members in that we run across in the world. Since October 2015, our community has been on a slow but steady rise. While we may not be the mega-power we once were in ESO, we still share epic memories and memorable moments on a smaller scale. 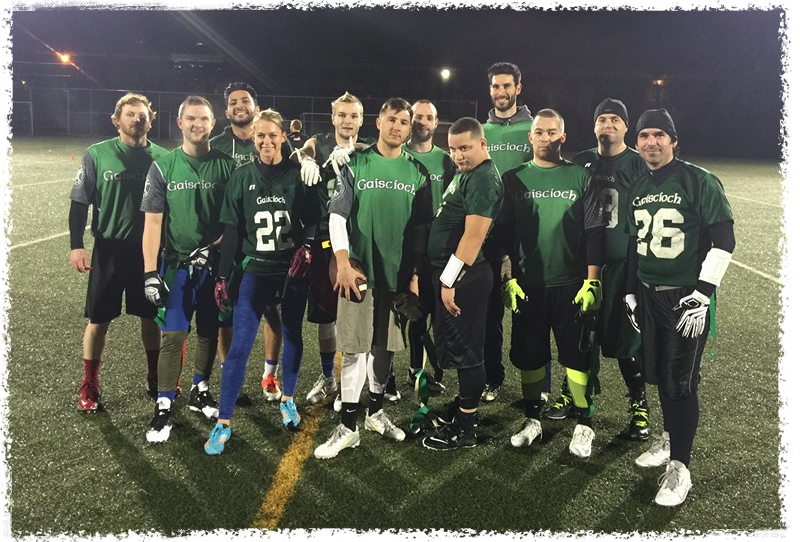 The Gaiscioch Football program won their first B-Division Championship on September 16th, 2012 in PortlandFootball.com's 5-Man Competitive Flag-Football league. In the fall of 2014 Gaiscioch Football won their second Championship in the Recreational Division of PorlantFootball.com's 5-Man Competitive Flag-Football league.During the summer of 2014, in the hottest weekend in Portland's recorded history, the Gaiscioch played 8 football games over 2 days in the Comcast SportsNet Summer Football Challenge and swept the tournament with an unbeaten record.

Today the Gaiscioch Football has grown to the point of fielding up to 3 teams at a time with their Co-Ed, Casual, and Competitive teams in the Portland Metro area. They continuously play in various flag-football leagues in the area and compete in regional flag-football tournaments in the Pacific Northwest.