The Mythology of the Gaiscioch 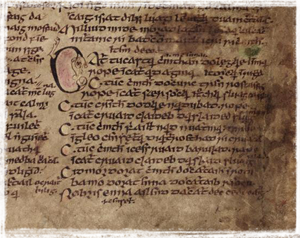 What is a Gaiscioch? The Gaiscíoch takes it's name from an Irish legend found within the "Lebor Gabála Érenn" and "Cath Maige Tuired" which chronicles the first people of Ireland the Tuatha de Danann. Specifically the First Battle of Moyturna where the Tuatha de Danann chose the most honorable and loyal warriors to fight along side the Celtic gods in a battle against the Fir Bolg. These Warriors were known as the Gaiscíoch.

When the de Danann learned of this, they sent their finest craftsmen and warriors to the Fir Bolg to teach them how to craft weaponry that was equal to their own and train their generals to use it. After 6 months the two sides chose 300 of their best warriors. Bres met Sreng in the middle of the battlefield and told him that they hadn't need to continue this senseless war. But the Fir Bolg could not stand down. The first battle was with hurlers, which slinged stones at each other until one side could not stand. The Tuatha were victorious. Again Bres met Sreng in the middle. He asked that they end this senseless bloodshed. Against the Fir Bolg declined. The next day the Gaiscioch and the Tuatha headed into battle and by night fall every last Fir Bolg warrior had fallen. During the battle the Tuatha King Nuada lost his right hand to the blade of Sreng. He was replaced by the Dagda as the King could not show weakness or be disfigured in any way.

After the battle was over, The Tuatha returned to the Fir Bolg. They offered them any one of the 5 provinces of Ireland for them to settle and do with as they please. They then threw a feast and invited the brothers from the south to join them. The Fir Bolg and the Tuatha joined forces as one united Irish nation and later fought together to defeat the Formorians. The two races of man would stand strong for several centuries until the Milesius would arrive.

This volume, edited for the Society by Elizabeth A. Gray, is the only modern edition of one of the key texts of the mythological cycle of Irish storytelling. The story of the epic battle between the Tuatha Dé Danann and the Fomoire, although written in the Old Irish period, is preserved only in a sixteenth-century manuscript. Set within the framework of early Irish pseudo-history, as contained in the Lebor Gabála Érenn (vols 34, 35, 39, 41, 44 above) the tale is in fact, as the editor points out, timeless. Moreover, its basic theme of a battle between the gods is often compared with similar stories in Scandinavian and Indic traditions. More than any other Irish tale, therefore, it has attracted the attention of non-Irish specialists in mythology, such as Jan de Vries and Georges Dumézil. Dr. Gray's edition is accompanied by extensive notes on the various Irish divinities featured in the tale.

The Lebor Gabála Érenn is an overview of the events that transpired between the coming of Adam and Eve through the conquest of the Milesians. This book series serves as an introduction to the folklore and is a good place to get started. For more detailed texts you will want to look for the other books such as Cath Maige Tuired which give in depth documentation of the battles that were described in the Lebor Gabála Érenn.

This late eleventh-century text contains a record of the legendary history of Ireland. John Carey, who provided the Society's five-volume edition by R.A. S. Macalister with a new introduction in 1993, described the text as 'a sweeping, unified account of the origins of Ireland and of the Gaels, extending from the creation of the world down to the time of writing'. Originally consisting of a collection of poems by several writers, the author fitted these into a prose framework which paraphrased and elaborated upon the verse. And as John Carey also stated, while Macalister's edition has been deservedly criticized for its many faults, and not least for its lack of an index, it continues for the present to be an indispensable work for all interested in this enormous repository of tradition.

If Celtic folklore and the myths of the Irish are your thing, you should seriously consider joining the Irish Text Society. Members receive large discounts on books (50% in most cases) purchased through the Royal Irish Academy. This is a great way to collect the stories at an affordable price.

For more on Celtic Mythology


DISCLAIMER: The Gaiscioch Social Gaming Community is loosely based off of the mythology stated above. We are not affiliated with or endorsed by the Royal Irish Academy or the Irish Text Society. The Gaiscioch receive no proceeds from any purchase from either the Royal Irish Academy or Irish Text Society. The links contained above are purely for self educational purposes and are not a means of capital gain.